Villavélo Twente "has become the name of a unique collaboration between hotel Twents Gastenhoes and Bike Challenge of former professional cyclist Maarten Nijland.

In total, 33-35 wheel guests can be accommodated in this "Villavélo Twente". There are sixteen hotel rooms for two people and also rooms, including a spacious apartment with kitchen. The former swimming pool is the meeting place and there we are located our cycling café. All rooms also have a private shower and toilet. Shower rooms have also been created behind the cycling café, so that cyclists who do not use the hotel rooms can still refresh themselves after a clinic.

Outside there will be a Jacuzzi and a large terrace. Furthermore, the rooms on the ground floor have a private terrace and on the upper floor there is a balcony, so you can always enjoy the outdoors. The storage and workshop is fully secured with cameras and anyone who wants access to this space will get their own pass. The rooms are deliberately spacious and have lots of glass.

During the NK cycling in Ootmarsum at the end of June 2014, these partners came into contact with each other and the first discussions immediately made it clear that there was a click between Gaby and Herman Oude Brunink, the manager couple of the Twents Gastenhoes, and Maarten Nijland, the owner of Bike Challenge. . The hotel wanted to come up with a new impulse for Ootmarsum and Twente, while Maarten Nijland sought shelter for his workshops and clinics for the sporty cyclist. During that NK 2014 they expressed their wish and after that ideas arose, which now become reality, because at Easter 2016 the 'Villavélo Twente' must experience the start of a new team that, with this unique concept of a Bicycle Hotel with multiple possibilities, can only strengthen. 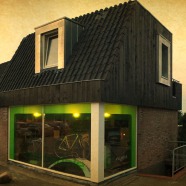