‘The garden of the Netherlands’, that's the nickname of this piece of Twente near Ootmarsum. Picturesque pools, waterfalls and narrow streams in the middle of the forest. Hills, fields, lakes, grasslands, heathland and historical farms complete the picture. Around 1920, Springendal was purchased by the Enschede textile baron Jannink. He gave the ancient farmlands the appearance of an estate with many English characteristics. The medieval essen (elevated fields that were raised higher and higher due to repeated fertilisation), surrounded by trees, make up a part of this. The estate also contains a number of marvellous Twente farms. Springs and streams Springendal is characterised by a structure of avenues and water. In addition to the monumental Mosbeeklaan, which is joined by several other avenues, the character of the estate is defined by its springs and streams. Water bubbling to the surface forms three ponds, which, in turn, feed into the Springendalsebeek. 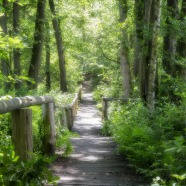